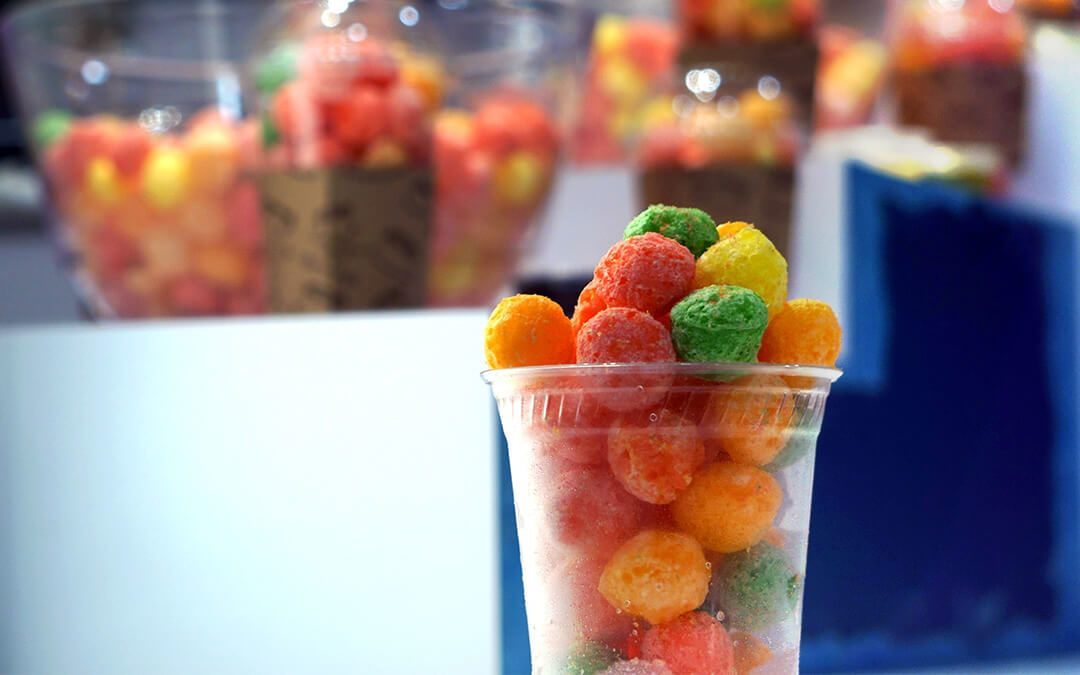 Liquid nitrogen in desserts is perhaps nothing new. This trend stormed onto the scene in the late 1990s and became a novelty for the foodie scene in the 2000s, especially in LA. Pioneered in the mid-90s by French physicist and chemist Hervé, this technique was then adopted by chefs the world over. An innovative — and safe — way to up the ante on their most inventive dishes, liquid nitrogen opened up new avenues for the culinary world, from custom ice cream to high-end cocktails.

You may already know that nitrogen is one of the most abundant elements in our atmosphere. This colorless, odorless, and tasteless gas makes up 80% of the air we breathe. For cooking, nitrogen is used in its liquid state. Characterized by a freezing temperature of -196ºC / -320ºF, liquid nitrogen “freezes” everything it touches — instantly. As a cooking technique, liquid nitrogen offers several benefits: It speeds up cooking times by eliminating bacterial growth, freezes fluids with minimum ice crystal formation, freezes foods that cannot be frozen in a normal manner (such as food with high alcohol content), and offers endless creative possibilities.

For culinary applications, a specially designed receptacle must be used, since liquid nitrogen is so cold. These dishes are often made from stainless steel to prevent breakages and with an inside coating of cork or Teflon to minimize evaporation. Heavy gloves are also used to reduce contact. The only special precaution is that liquid nitrogen must be used in well-ventilated areas.

Since liquid nitrogen almost instantly freezes any product it comes into contact with, this quick change alters the original appearance of food, along with its texture. This allows chefs to make items such as powdered oil, frozen foams, and crunchy treats. When using liquid nitrogen, chefs can also play with temperature contrasts, serving a single dish where the inside ingredient is kept at its ideal temperature, while the outside is completely frozen. More common culinary uses are flash-frozen ice cream and smoky cocktails, involving new sensations like the “dragon effect,” in which the swallowed vaporized nitrogen comes out of the drinker’s nose.

A leader in the foodie scene, Los Angeles saw liquid nitrogen take a huge foothold in their culinary world, especially in desserts.

Chocolate Chair, a dessert shop found across the Greater Los Angeles area, was one of the first stores to offer the “Dragon’s Breath” dessert. Made from colorful cereal, the cereal is dipped in liquid nitrogen and served in a cup. With a taste similar to Froot Loops, the eater uses a stick to skewer the balls and eat them. Once in the eater’s mouth, the cold of the liquid nitrogen combines with the warmth of the mouth to release visible vapors out of the nose and mouth. This fun dessert was originally invented in 2008 by the famous chef, José Andrés. By 2009, the concept had spread throughout Taiwan, Korea, the Philippines, and more. More about the experience than the taste, this dessert continues to be popular, especially on social media.

Super Cool Creamery in Los Feliz serves another delicious dessert made possible by liquid nitrogen: nitro-ice cream. Made to order with liquid nitrogen in custom-built machines, the quick freezing makes for a super-creamy consistency as well as an endless variety of flavors. Similar to Dragon’s Breath, this ice cream relies heavily on the experience of watching it be made right in front of you. But the tastes of the ice cream are just as important, with flavors from ginger to key lime to more adventurous ones like a French75.

With liquid nitrogen in foods, your imagination is really the only limit. We’ll surely see even more liquid nitrogen culinary innovations in the years to come. And while it’s worthwhile to note that liquid nitrogen can pose consumption dangers if used incorrectly, it’s a relatively safe and delicious practice — with the right supplier.

Up to date on the specific requirements for safe storage, handling, and usage, CalOx specializes in providing restaurants, eateries, and gastropubs liquid nitrogen for food consumption. From regular deliveries to storage, delivery, and handling equipment, along with training and maintenance, CalOx takes the hassle out of using liquid nitrogen in your business. Contact us today for your quote!

← A New Wave of Wellness: Cryotherapy, Hyperbaric Oxygen Therapy and Beyond CO2 and Dermatology →